Breckenridge, Colorado, is a year-round ski resort town and summer recreation hotspot. The popular adage among locals is that people come for the winter but stay for the summer because the mild summer weather in Breckenridge combined with its endless blue skies are simply gorgeous. Of course, skiing in Breckenridge rules the winter season (along with other Breckenridge winter activities like snowboarding and snowshoeing) and, of course, winter weather in Breckenridge, CO, means even more blue skies and lots of fluffy snow. From the beautiful mountain views to the many things to do in Breckenridge, CO, and, at an elevation 9,600 feet (or 2,926 meters), Breckenridge will literally take your breath away. As the largest town in Summit County, Colorado, Breckenridge restaurants present endless variety from fine dining and family spots to an open-air crepe house or the nation’s only Starbuck’s located in a Victorian-era home. Even if you’re not the outdoorsy type, you will never run out of things to do in Breckenridge, CO, because the town is steeped in history from the mining era of the mid-1880s and the Arts District offers up classes plus unforgettable daytime and nighttime events. Main Street serves as home base for shopping in Breckenridge with stores that will outfit you in chic mountain or western styles or will help you choose the perfect gift to take home.

While the town is best recognized as a family-friendly ski resort, Breckenridge nightlife has a few truly fun options for the Party People in your group. And whatever the setting, be sure to introduce yourself to the people around you. The locals are some of the friendliest people you’ll find anywhere and the town hosts visitors from all around the world as well as from the Denver metro area, so a truly interesting conversation is just a few kind words away.

When it’s time to rest your head from a day filled with adventure, there’s no shortage of accommodations in Breckenridge. Lodging options range from Breckenridge hotels to full-service resorts and bed-and-breakfasts. Breckenridge vacation rental properties are sized for couples, families and even larger parties that travel to the mountains for weddings in Breckenridge.

Breckenridge is the largest town in Summit County, Colorado, and is one of the small handful of Colorado resort towns that enjoyed a rich history prior to its popularity as a vacation spot. Breckenridge was founded officially in 1859 when prospectors struck gold along the Blue River. In 1887, two explorers found Tom’s Baby, the state’s largest gold nugget weighing more than 13 pounds. A long period of surface (or placer) prospect mining was followed by hard rock mining as prospectors followed gold veins into the nearby hills. Soon thereafter, hydraulic methods were added and abandoned in favor of dredge mining in which large machines with automated lines of buckets tore through river beds to separate dirt, sand and gravel from gold. Historic remnants of dredges can be found throughout the area.
Though town fortunes rested on mining successes, Breckenridge never yielded to ghost status, though haunted tours are extremely popular here. In December 1961, a lumber company called Rounds and Porter opened the Breckenridge Ski Resort, ushering in a new era of outdoor recreation. Transportation improvements along I-70 such as the Eisenhower/Johnson Memorial tunnel (constructed from 1968 through 1975) reduced travel time between Denver and Summit County, boosting accessibility for residents along the Front Range and for visitors from around the world.

Breckenridge, CO, is the kind of Rocky Mountain paradise that people visit time and time again. It’s typical to meet people who spend their vacation here every year, especially families who use the town as an annual gathering place. In fact, once you start chatting with locals it’s likely you’ll learn that they came here first on vacation. Will your stay in Breckenridge have you packing up to move here? Breckenridge is now the most populated town in Summit County. You can make it your home too.
Everything Summit on Instagram
Articles

Skiing and snowboarding are at the heart of the... Read Article

If you want to check out the Summit County... Read Article

By Lauren GlendenningBrought to you by Tumbleweed... Read Article

END_OF_DOCUMENT_TOKEN_TO_BE_REPLACED

Summit County Report is brought to you by: 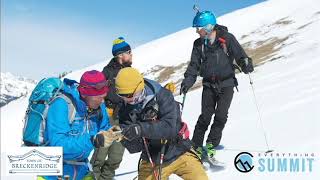 Brought to you by:

Yoga + Pregnancy: A Training for Yoga Teachers With Kari Kwinn